Mandi Rafaty knew he wanted to be an architect when he was just 10 years old. His training began early, as he spent his childhood traveling to different cities with his father, looking at houses for fun. Mandi also attributes his exceptional creative problem solving skills to his father, who inspired him and his brother Mehdi to start Tag Front.Now in his dream job, acting as a Design Director for Tag Front as well as a company Principal, Mandi believes the best architecture results from looking for alternative solutions to challenges rather than settling for an obvious approach. He finds inspiration in researching new materials and finding innovative ways to incorporate them, and he always strives to push the envelope as far as reality will let him. Mandi holds a Bachelor’s in Architecture from the Southern California Institute of Architecture (SCI-ARC). In his spare time, he travels as often as possible to take the energy of different cities and continues to evolve as a designer. 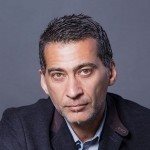